Welcome to my first of a series of posts featuring all the competitors in Drum Corona International! While the past weekend was a holiday for Independence Day here in the States, Canada Day was only three days prior. So I thought it made sense to start with the three Canadian competitors.

Before getting to the corps themselves, I think it’s worth mentioning that there used to be a very active drum corps scene in Canada. Being Canadian, this is a topic I’ve wanted to write about for some time. The only corps active now is Les Stentors, but there were at least a dozen DCI drum corps from Canada in the 1990s and even more drum corps in general in the 1960s and 1970s!

Canada even had its time near the top of DCI. In 1976, the Oakland Crusaders (formerly called De La Salle Oaklands) and Seneca Optimists made DCI finals, both out of Toronto. As a fun piece of trivia, I believe this makes Toronto is the only city to have 2 corps competing in DCI Finals at once! The Canadian drum corps community back then was even vibrant enough that DCI hosted the World Championships in Montreal in 1981 and 1982.

What Happened to Drum Corps in Canada?

Over the last three decades, there’s been a lot of forces that have pushed down drum corps in Canada. In particular, I think there are 5 major factors that contributed to the decline:

Unfortunately, I think this combination of factors also means that drum corps probably won’t come back to Canada in a substantial way. Finding enough students to fill a drum corps is difficult, financing one is difficult, and the logistics of running a drum corps in a different county are almost impossible. There have been some attempts to bring drum corps back to Canada over the years, including some SoundSport groups, but I don’t think they’ve really gone anywhere. With the cancellation of the 2020 DCI season, I worry that Les Stentors will fold and bring an end to Canada’s involvement in DCI.

We can pay some homage to drum corps in Canada by exploring the three Canadian drum corps that are competing in Drum Corona International: Academie Musicale, Kiwanis Kavaliers, and Les Etoiles. 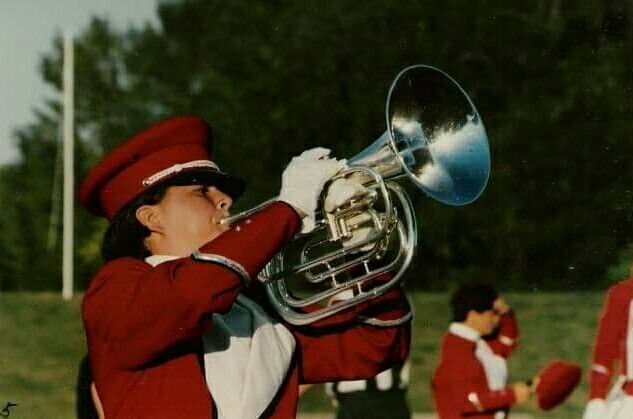 I expect this will be somewhat rare for the Drum Corona Spotlight series, but their 1997 show is avaialable in its entirety on YouTube!

I was surprised by how good this show was. It’s very traditional when viewed through the lens of 2020, but the second movement is fast tempo, features battery sections playing features with the high brass, and the music is fast and exciting. These are all common features of a modern drum corps shows, and the crowd absolutely loved it. I’m a little disappointed they didn’t use that style again for their closer, because that would have brought the house down!

What hasn’t aged well, in my opinion, is their marching style. It’s not straight-leg, but also not the true bent-leg technique that Santa Clara Vanguard uses and that Cavaliers used in their heyday. It just doesn’t look very clean, and that clean aesthetic is incredibly important to modern drum corps. The differences between individuals are more apparent with this technique than either of the modern ones.

Perhaps this is just because I’m getting older and all drum corps kids look young to me now, but I noticed that Academie Musicale looks especially young. This is fairly typical of Canadian drum corps, because the older, better students have always found a home in DCI’s more elite corps. If they are a young corps like I think they are, the product they put on the field is very impressive!

Academie Musicale performed at 21 DCI shows in 1997, but I only have recaps for 9 of them. They started the season at a 65 on July 3rd and didn’t appear to improve much for most of the season, only getting a 69.1 on July 24th. However, their scores jumped by leaps and bounds for the rest of the season, and they scored an 81.4 on August 14th in Prelims, which was good enough to get them into semifinals.

The small sample size, coupled with large gaps, makes their forecast for the Drum Corona International season pretty uncertain. The model thinks the early season scores are more indicative of their true talent level (due to sample size), so they have a pretty low ceiling, but right now, they still have a very good chance to make Semifinals.

The Kiwanis Kavaliers are perhaps the best-known Canadian drum corps, given their “recent” success. In the late 1990s, they came close to making DCI Finals twice (1996 and 1998), getting 14th each time. I don’t think any Canadian corps has gotten close to making the top 12 more recently than that. Despite folding 14 years ago, I believe they are also the most recent Canadian corps to compete in DCI’s top division.

After their success in 1996 and 1998, like most Canadian corps at the time, their membership and competitive success began to slide. In 2003, they couldn’t be included in the DCI DVD (back when DCI put more than the Top12 on the DVD) because of music licensing issues, which made them bellwethers in a way. By 2005, they could hardly be considered a Canadian corps, as they had decided to pool resources with the Tampa Bay Thunder and held camps exclusively in Florida. As a nod to their Florida connection, I gave them the same schedule as Spirit of Atlanta instead of the Boston Crusaders.

Their 2005 program was called Mission Accomplished, and was ironically their final show in DCI. While the term “Mission Accomplished” being used in 2005 brings images of an aircraft carrier bearing a mediocre president to mind, Mission Accomplished has nothing to do with American foreign policy. Instead, it’s a spy show, featuring music from The Incredibles (which had only come out the year before), Mission Impossible, and the Pink Panther.

Several years ago, DCI featured Mission Accomplished as their show of the week, which was the only clip of them that I could find on youtube:

I don’t think it’s aged quite as well as Academie Musicale’s show did. The music is fun, but the tempo isn’t that fast, and consequently neither is the drill or guard work. I think this clip also spotlights something else that Academie Musicale did well in 1997: they managed to use the whole field despite being a fairly small corps.

2005 was not a great year for Kiwanis - they didn’t even make Semifinals - and the large sample of shows makes the model pretty confident it knows how good they are. This has them in the bottom 5 corps of Drum Corona International competitors with a small chance at making Semifinals.

Les Etoiles (which translates to “the stars”) are another French Canadian corps, from L’Acadie, Quebec, although they also operated out of Laval. Their history is full of mergers, most notably with L’Instolites in 1995, and they were quite good for a few years, winning Division II and placing 15th in DCI Semifinals in 1996. While it isn’t the focus of this post, that 1996 show is available in its entirety on YouTube and well worth the watch! The visual design is incredibly modern, and they could play!

Sharing a common theme with the other Canadian corps, their fortunes dipped in the late 1990s, and 1999 was their final year in DCI despite having just moved up to DCI’s Division I in 1998. The show that year was called Ice Storm, and I believe it featured original music. I wasn’t able to find any audio or visual recordings of the show, unfortunately. If you can find something, please let me know or @ me on twitter!

Les Etoiles are the lowest scoring of the three Canadian corps, although not by much. Like Kiwanis Kavaliers, they are in the bottom group of Drum Corona International competitors without much chance of performing after Prelims.

What’s interesting about Les Etoiles’ scores is that they scored very well in Music - matching mid-tier corps like Troopers and Oregon Crusaders - but their visual scores are much lower, perhaps worst of the 35 corps in Drum Corona International. To have such a large gap between captions is pretty rare and very surprising.

I hope you are enjoying Drum Corona International! People who do open-source projects like this often ask for donations to help cover expenses (like server costs) but luckily I’ve got that covered. Instead, if you’re enjoying any of my projects, please consider donating to the Michigan Drum Corps Scholarship Fund.

The Michigan Drum Corps Scholarship Fund is a 501(c)3 nonprofit that I cofounded to help support members of the Michigan band community who are interested in DCI. The organization offers scholarships to Michigan students marching or auditioning with any DCI drum corps. The economic implications of COVID-19 are broad, and I think scholarships programs like this are especially important for keeping drum corps accessible to everyone. Every dollar helps!